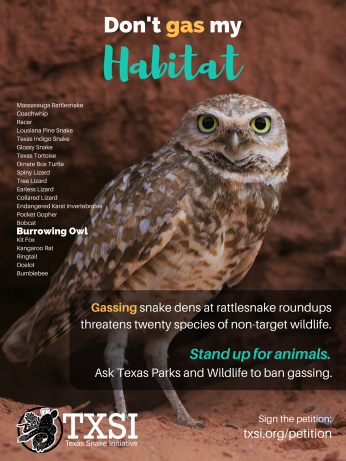 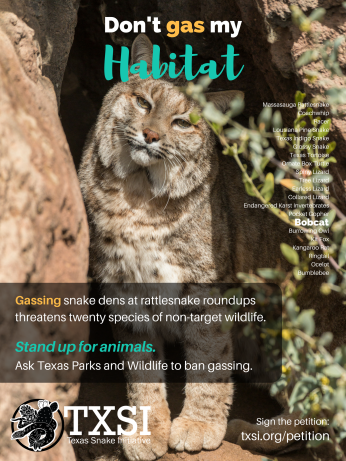 For many years, rattlesnake roundups have used “gassing” as a technique to drive rattlesnakes out of their dens. Hunters pour gasoline into these dens, which threatens to suffocate snakes if they do not escape. Unfortunately, by seeking fresh air they are met by hunters who collect them in mass numbers for roundup events.

Gassing affects all of us. It pollutes our groundwater, and threatens the twenty non-target wildlife species that share these burrows. Beautiful animals such as ocelots, burrowing owls, ringtails, and kit foxes are put in harm’s way by gassing.

Last spring, Texas Parks and Wildlife received a petition from the Center for Biological Diversity, co-petitioned by us here at Texas Snake Initiative. A proposal was made to discuss a ban on gassing at the November 2016 meeting. However, this proposal has been removed from the agenda. Together, let’s work to change that.

Tell Texas Parks and Wildlife that you will not stand for this cruel practice by signing below: